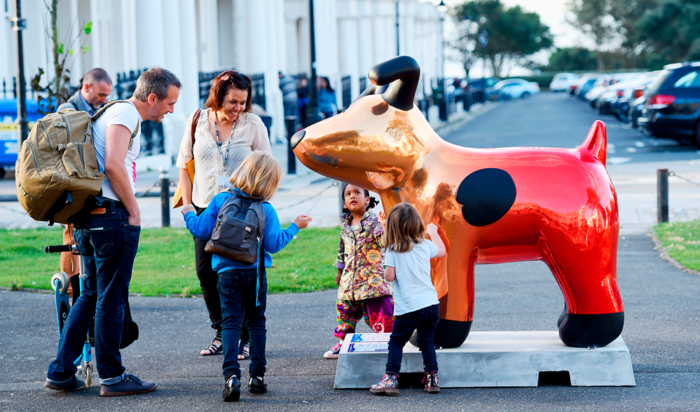 The team behind Snowdogs by the Sea celebrated on Thursday 14th September as the epic sculpture trail bagged the award for Best Event in the City 2016.

“We are delighted to have won this award as, not only was Snowdogs a phenomenal fundraising success for the Hospice, but it also touched so many people in the city and brought the whole community together. It was a huge risk for an organisation like Martlets to put on such a large-scale event, and we are so grateful to the Brighton and Hove business community for getting behind and being part of that success. Snowdogs had such a positive impact on the city of Brighton and Hove in so many different ways, and we couldn’t have done it without you.”

“The award is a great achievement not only for everybody involved in the making of Snowdogs by the Sea, but also the hundreds of thousands of people who embraced it. Together with our partners, a big thank you from us for making it 2016’s best event in the city!”

“Snowdogs by the Sea was the culmination of months of hard work, commitment and passion shown by many individuals and partners and we are thrilled for the recognition that this award offers.  The trail has had an overwhelmingly positive affect on families and businesses in Brighton and of course for The Martlets Hospice who were able to secure much needed funds to ensure they can continue their amazing work.  We are incredibly proud to have been a part of it.”

The nine-week sculpture trail which hit the streets of Brighton and Hove in Autumn 2016, attracted more than 350,000 visitors, contributed over £10million* to the local economy, generated extensive media and social media coverage, and, most importantly, raised over £310,000 for Martlets.

The campaign brought businesses and organisations across the city together in an informal network and generated unique collaborations, such as the ‘Selfie Challenge’, organised by GSFW, which saw business teams race around the city ‘bagging’ selfies with as many Snowdogs as possible.

The sculpture trail also generated amazing support from the city’s artistic community; local artists created the majority of the bespoke Snowdogs and many gave their time to run workshops with schools and young people to extend the reach of the project.

The proof of the event’s success came at the Snowdog auction, where celebrity auctioneer, Tim Wonnacott, expertly harnessed the ‘love’ for the Snowdogs and turned it into hard cash for the Martlets.  Over 10,000 people tuned in to watch the bidding live on Facebook and saw Snowdog ‘Max’, created by local designer, Sarah Arnett, sell for an incredible £22,000. 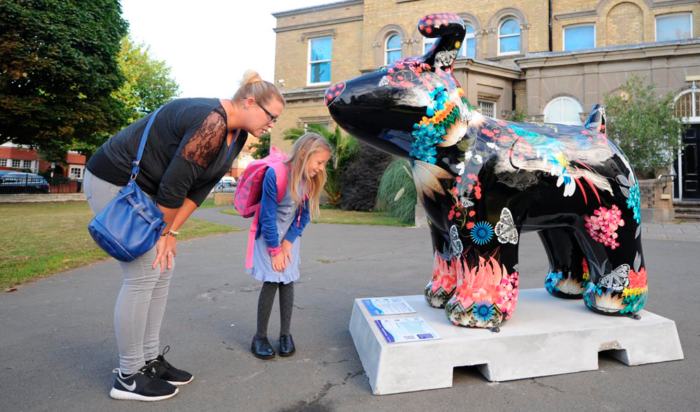 Research commission by Wild in Art and carried out by NGI* identified that the Snowdogs reached every demographic in the city and touched people who may not previously have thought ‘an art’ event was for them. One hundred percent of Brighton and Hove residents said they were proud to have the trail in their area. Another key benefit of the event was its effect on health and wellbeing in the city, with people being encouraged to get outside and walk more. Families also reported a positive effect on family life as visiting the Snowdogs encouraged them to spend more time together.

The Snowdogs also touched people in many very personal ways. One of the most touching responses was from the family and friends of Niamh Storey Davidson, a dog loving, nine-yearold, who died of a rare Wilms’ tumour in 2014. Niamh’s family and friends, in particular her twin brother, Zach, knew she would have loved the Snowdogs. As a school community they got together to raise the money to bid for beautiful Snowdog ‘Bobby’ and it now stands as a fitting and lasting memorial to Niamh in Balfour School playground.

In light of the success of Snowdogs by the Sea, Martlets has announced that there will be another sculpture trail in Autumn 2018. Speculation has been mounting as to what the next sculpture will be.

The Theatre Royal is the venue for the big reveal on 12th October when businesses in the city will once again be able to sponsor their very own sculpture and be part of this unique public art event.

Anyone interested in being a sponsor of the next trail should contact: Sarah Harvey, Project Manager at sarah.harvey@martlets.org.uk.

All
Artists
Ashford Snowdogs
Great North Snowdogs
Paint Your Own Snowdog
Snowdogs by the Sea
Snowdogs: Tails in Wales
The Snowdog
Uncategorized